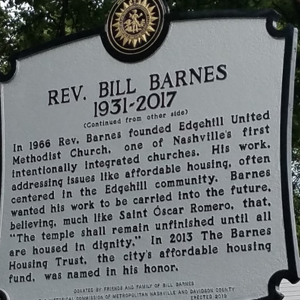 In The Scarritt Tradition: Alumni/ae and Scarritt Bennett Center Lead the Way in July 2019!

Over the past month many events have illustrated the continuing impact of our tiny, unique former college on the quality of life in Nashville and the world. Though Scarritt closed as a degree granting institution in the ‘80’s, its voice resounds powerfully through Scarritt Bennett Center. Here’s evidence:

Barnes Historic Marker at Edgehill United Methodist Church
The life and work of Reverend Bill Barnes, for whom Nashville’s Barnes Housing Fund is named, was memorialized with an inspiring marker unveiling ceremony last week. The marker is located on the front yard of the Edgehill United Methodist Church. Edgehill UMC is an intentionally racially inclusive congregation which Barnes founded in 1966. Reverend Barnes, who was pastor until 1997, began the congregation to pull people beyond the boundaries of a segregated society and into one shared beloved community. The church in time became one of the first Reconciling congregations welcoming persons of all sexual identities or orientations. The Tennessean covered the monument unveiling in a photo story.
Scarritt College played a critical role at the very beginning of the organization of Edgehill church. Though some saw a tremendous need for such a church, little to no funding was made available. Dr. Alice Cobb, who led the tiny Church and Community Work program at Scarritt, offered Rev. Barnes a part time position that became a core funding source during the church’s startup period.
There were many inspiring elements of the marker ceremony, which included statements by Mayor Briley and other community leaders. The presentation by a group of students who had researched Rev. Barnes’ life was perhaps most hopeful. The students created a huge, perhaps ten foot tall, Bill Barnes look-a-like puppet. They shared many quotes and stories from his life work. Knowing that his love, concern and vision for our city is planted in their hearts offers much hope in these very perplexing times.

Neighbor to Neighbor (N2N) Video Interviews
Neighbor to Neighbor, led by Executive Director Jim Hawk, current Scarritt Alumni/ae Chairperson, is a citywide organization which assists neighborhood residents in evaluating their areas needs and possibilities. They then train, prepare and empower leaders to address those needs. Jim Hawk video- interviewed leading mayoral candidates on topics of concern to neighborhoods as the city prepares for its election. The various candidates’ commitments to residential concerns, as distinguished from large scale economic development, corporate recruitment and tourism are of great interest to many voters.

“Saving the Planet”: United Methodists train for action on climate change at Scarritt Bennett
This major four day national conference brought together over two hundred people and focused on addressing climate change. It was led by Rev. Paul Slentz, director of Creation Care and Environmental Justice for the Tennessee Conference of the United Methodist Church. The gathering warranted a head-line front page photo article in the Tennessean (shared with coverage of NOAH’s mayoral forum).

We are happy to post these words by Jim Polk as “the good word” for this week. Jim is a graduate of Scarritt College and a member of the Scarritt Bennett Center Board. 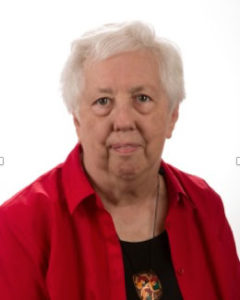