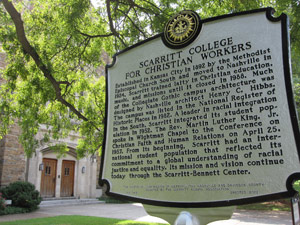 Mantras on the Mind: A Reflection on Dr. King’s Sermon from 1957

“God, give us leaders! A time like this demands great leaders.” These words have become somewhat of a mantra lately, returning to my thoughts again and again like a wave crashing to the shore only to return back to sea to then later rush back suddenly once more. My mind was first exposed to these words when I was reading Dr. Martin Luther King, Jr.’s sermon “The Role of the Church in Facing the Nation’s Chief Moral Dilemma: Segregation,” in preparation for the upcoming MLK Memorial Vigil. Although these words — penned by the poet Josiah Gilbert Holland — were first spoken in this context when Dr. King spoke at integrated conference of Southern church leaders here at Scarritt Bennett Center in 1957, it is completely unbelievable how pertinent the sermon is to today and the current issues facing our nation. No longer referred as segregation, systemic and institutional racism against brown and black bodies continues to plague the United States through injustices regarding police violence, mass incarceration, reproductive justice, gentrification, healthcare, poverty: the list goes on and on. It can be quite paralyzing to think about the extent in which discriminatory practices and unchecked privilege and power have continued to persist in our nation into the year 2015, and it can become overwhelming to think of the immense challenge of dismantling these systems and rebuilding ones foundational in “the simple art of loving our neighbors and respecting the dignity and worth of all human personality.” (King 1957).

“God, give us leaders! A time like this demands great leaders.” What is a leader in a crucial moment such as this, where standing up for justice becomes standing against systems and governments and hegemonic world views that have been internalized, almost invisible if you don’t look closely. My mind drifts to an echoed mantra coined by inspiring womanist Alice Walker: “We are the ones we have been waiting for.” So if we are the ones we have been waiting for, aren’t we the leaders that this period demands? A time like this may demand great leaders, but it does not demand that we be all the same — because we are not the same. Leadership, in times of injustice, reveals itself through the individual who inspires the populace with the truth and words that ignite the hearts to justice. Leadership also shines through the person who truly listens to the thoughts and voice of the people who endure these injustices, who acknowledges her privilege and seeks to support, not overpower or control. Leadership is additionally illuminated through the people who care for one another, who prepare nourishment, sustain good spirits, and practice radical hospitality to those around them in these times. Yes, a time like this indeed demands great leaders, but as I look around the amazing community of activists I am so lucky to interact with on a regular basis, I see them. They are here. They are all around us, in every community and every city around the nation, envisioning and creating a new reality.

“God, give us leaders! A time like this demands great leaders.” Leadership, however, cannot be embodied only through individuals; change requires that larger entities are reminded and transformed of the call to action for justice and peace. Dr. King structured his entire sermon around the idea that the Church, the collective body of faith believers, must undertake a critical role of leadership to combat racism. He challenged the Church to first eradicate “the ideological roots of race hate”, misconceptions that fuel the divisiveness that aims to pit people against each other and still exist today. Who was it anyway who decided that justice was a fixed entity, reduced to a finite amount given only to a few in a manipulated zero-sum game of society?

The second task that Dr. King wrote the Church must take on is “to keep men’s minds and visions centered on God” (King 1957). Dr. King elaborated on this point that often when we approach racism, “our thinking is so often anthropocentric rather than theocentric” (King 1957). We are so fixated about what other people think about us that we can easily forget to ask what God thinks about us and our actions towards others. How many times have the Church stifled the truth from for the sake of not being the only one to stand up to political or economic injustice or stand by while people are literally dying in the streets? It is difficult, yes, but it is precisely this reason that we must seek strength in community, find space among others wrestling with these ideas, and take solace in knowing that mistakes will be made and forgiveness is ready to be given.

The third call to the Church poignantly made by Dr. King is for the involvement in social action. The first suggestion to undertake, Dr. King wrote, should be “the Church’s determination to purge its own body of discriminatory practices,” abolishing claims of difference and fear among men of different races (King 1957). A second mode, he implores, demands that the Church stand up and out against racism and injustice. Unfortunately, one does not have to look too far to find an opportunity to protest injustice occurring in any form, especially when it comes to the racialized violence that has become at the forefront of this national conversation about race. The Church, once a central meeting and grounded space for the Civil Rights Movement, has shrunk back to a comfortable back-seat position where politics and faith are kept at an arm’s distance away. Dr. King implored the Church to do otherwise, to learn from the radical example of love and compassion that Jesus practiced and live out those principles. These things, he wrote, the Church can and must do in order to successfully combat racism and injustice.

Remember, all of this wisdom comes from a sermon spoken over half a century ago from one of the most influential leaders of our nation. Movements have taken place, legislation has been enacted, and yet half a century later, Dr. King’s words are still immensely needed. The nation’s “Chief Moral Dilemma” still exists — although often masqueraded through a lens claiming we are now living in a post-racial society — so the powerful truths stemming from Dr. King’s words must continued to be spoken into existence. I invite you and encourage you to come to our MLK Memorial Vigil on January 19th at 6:30 pm in Wightman Chapel so you can join us in listening to the full sermon of Dr. King and let his words meditate on our hearts and thoughts. May they become like mantras in all of our minds, perpetually calling us forward to respond and take action against injustice today and forevermore.

Emily Johnson is a 2014-2015 Belle H. Bennett House Fellow at Scarritt Bennett Center. A recent graduate from Hastings College in Nebraska, Emily is passionate about the intersection of politics and legislative policy, women’s empowerment, eradication of racism, food justice, intentional community, and grassroots solutions to endemic social injustices. Emily plans to attend graduate school for food policy and law in the future.