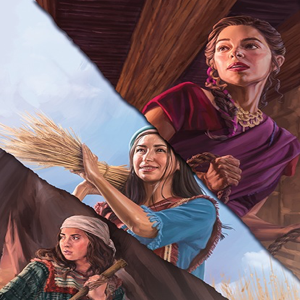 “Now a man from the house of Levi went and married a Levite woman. The woman conceived and bore a son; and when she saw that he was a fine baby, she hid him three months. When she could hide him no longer she got a papyrus basket for him, and plastered it with bitumen and pitch; she put the child in it and placed it among the reeds on the bank of the river. His sister stood at a distance, to see what would happen to him. The daughter of Pharaoh came down to bathe at the river, while her attendants walked beside the river. She saw the basket among the reeds and sent her maid to bring it. When she opened it, she saw the child. He was crying, and she took pity on him. “This must be one of the Hebrews’ children,” she said. Then his sister said to Pharaoh’s daughter, “Shall I go and get you a nurse from the Hebrew women to nurse the child for you?” Pharaoh’s daughter said to her, “Yes.” Exodus 2:1-8a

First the midwives, Shiphrah and Puah, disobeyed the king; then the Levite woman (Moses’ mother) let her son live and hid him in an attempt to save him; then Miriam, his sister, stayed by him on the river; and then Pharaoh’s daughter found and saved Moses. All of these women knew they were taking enormous risks, but they stood firm in their faith and/or the belief that all children should enjoy life. Each made decisions that set the stage of the exodus of the Hebrews from Egypt under the leadership of Moses.

Jan L. Richardson writes of these stories: “Midwife literally means “with-woman.” Shiphrah and Puah embody this “withness” in their solidarity with each other, with God and with the Hebrew people. Their creative partnership offers one model of the way in which women (and men) together challenge the people and systems that limit our choices, dreams, and lives.”

Miriam, as the sister of Moses, had to assume the subordinate role in the exodus story, but it was Miriam that helped save Moses and provided for Pharaoh’s daughter the means of making Moses her son. Miriam was the first woman named as a prophet and she helped her brothers lead the Hebrews to freedom.

What was the Pharaoh’s daughter’s name? We do not know, but we know she used her power of position to save a Hebrew boy. She knew she was defying her father, but she took on the job of being a parent to the boy she called Moses and she raised him until he was a young man.

Mary Nelson Keithahn writes in a hymn:
“A mother lined a basket to keep her baby dry,
then rocked him on a river, lest he awake and cry.
She let a princess name him her son that he might live.
God’s people had a leader. She had such hope to give.”

Courage, my friends to do what needs to be done to save the children of the world!