A Life of Holiness

On Sunday, February 19 the lectionary included verses from Leviticus 19 where Moses was instructed by God to tell the people of Israel: “You shall be holy, for I the Lord your God am holy. I doubt that many of us heard a sermon on Sunday using this text, but our service in Vespers & All That Jazz focused on what it means to be holy. Let’s do some exploration of the word and its religious history.

Holiness has taken many forms and understandings in Jewish and Christian thought, behavior, and theology. To some holiness is a way of living, open to God’s guidance and example. Others see holiness as a code of behavior, a list of dos and don’ts. To others holiness is a characteristic of God and just as God is holy, so we as worshippers of God are to be holy. Holiness is also understood to b the sense of awe one has for a God that is separate from us but in whose image we are made. Biblically, holiness is about all of the above, but the emphasis in both testaments is on a holiness that is expressed as justice, righteousness, and a right relationship with God, persons, and all of God’s creation.

John Wesley had at the core of his theology holiness, or as he often called it, the doctrine of perfect love. For Wesley perfect love was both inwardly and outwardly expressed. It was a total commitment to God with life centered in God and continually seeking God’s presence and grace. It was also expressed in loving the neighbor, the stranger, and in doing good works based on justice for all God’s children. To Wesley holiness or perfect love was an ongoing process, one in which you are involved throughout your lifetime. Leonard Sweet has defined this Methodist type of holiness as a “lived holiness, a synergy of faith and works, moving the world from injustice to justice, from cruelty to compassion, from evil to good, from lies to truth…[This holiness] is an affair of public policy.” Wesley’s holiness did not imply that one was without fault or temptation, but that life was lived in love and filled with the Spirit of God.

In the 1830’s in New England, Charles Finney, a Presbyterian clergyman, held a series of open revivals emphasizing that each person could choose salvation and Christian perfection. His message of free choice, the importance of testimony, and availability of holiness for anyone (men, women, slaves) changed the religious and social landscape of the time. He allowed women to pray in public; he encouraged the anti-slavery movement; and he assisted in founding Oberlin College which admitted both women and blacks. Methodist preachers and lay people, as well as those from other denominations, became very active in what became known as the holiness movement.

Holiness provided for women an affirmation of their worth as children of God. It gave them the freedom to “release themselves from the chains of domestic responsibilities.” For some women holiness reinforced the societal restraints put on women, but for many others holiness provided the impetus of moving them into the religious and public spheres where they were faced with prohibitions regarding the proper role of women. This religious movement led women to form their own organizations to look at such issues as slavery, drunkenness, prostitution, child labor, foreign and home missions, and women’s rights. They heard God’s call to do God’s work in their homes, their churches, and the world.

The holiness movement helped and encouraged men and women to live a life that was holy, a life that gave them the opportunity to be a follower of Christ in the personal and public arenas. We too can be holy. We too can be person “striving on toward perfect love” in our understanding of the faith, in our inward journey toward unity with God, and in our outward journey of doing justice and serving our neighbor. 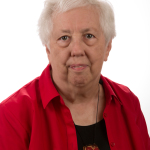